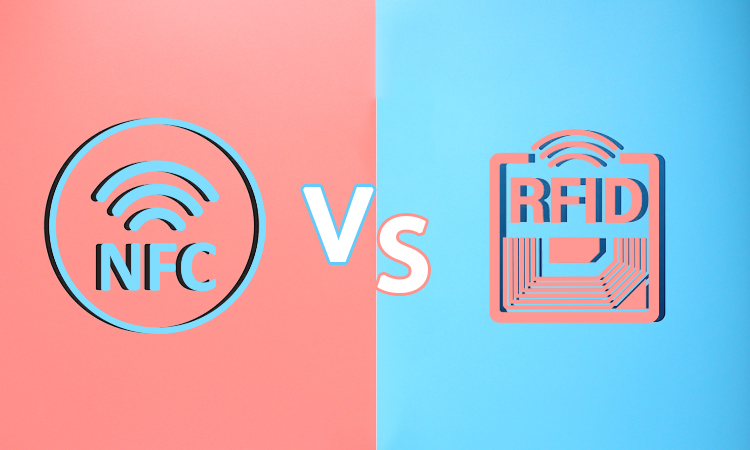 In recent years, contactless communication technologies have received increasing attention. The business developed by these technologies is gradually integrated into people’s lives. They provide people with an increasingly superficial and fast way of life. In particular, RFID and NFC perform exceptionally well in logistics and mobile payment. So RFID VS NFC, which one is better? What are their similarities and differences?

What is RFID VS NFC

RFID is a technology that transmits data via contactless. It uses radio signals to identify a specific and unique target. It uses a microchip inside the tag to store data. RFID systems include RFID labels, readers with antennas, and substrates. RFID tags can classify into active and passive depending on the power availability. Active RFID tags are busy and have their power source inside them to provide energy. Passive RFID tags are passive and provide energy through radio waves transmitted by the reader.

Often, RFID tags are used to track inventory. Manufacturing uses RFID tags as they make products to track products and ship them to customers. The transportation industry uses tags by placing them on objects such as trucks. Scanning the vehicle’s RFID tag captures data information. These data information may include positioning information, delivery time, etc.
RFID chips can also be implanted in animals to track them. Lost animals can scan to get the data information.

RFID can use in a variety of industries. In the retail sector, it also plays a role in theft prevention. The anti-theft function can be achieved by setting up RFID detectors at the entrance and exit of the store. RFID scanners scan customers as they leave the store. If a customer enters the store with an RFID-tagged item, the RFID detector will sound an alarm. RFID tags are also instrumental in the aviation industry. It can help airport staff to identify luggage and cargo.

NFC is a technology that evolved from RFID. It exchanges data by having two NFC-enabled devices close to each other. It enables short-range communication between two compatible devices. NFC will be used more in mobile payment, transportation, access control, etc. It can only read things up to 5cm range.

NFC is excellent in the mobile payment space. The large payment platforms we know as Apple Pay, Google Pay, Samsung Pay, and Fitbit Pay are all based on NFC tags to read data. According to UK Finance’s 2021 “UK Payments Market Summary” report, one thing can see. Roughly 17.3 million people signed up for Apple Pay, Google Pay, and Samsung Pay. Nearly 84 percent of them use their mobile payment capabilities.

RFID VS NFC: They are Similar

NFC uses a frequency of 13.56 MHz. It happens to be the same as HF RFID among the three operating frequencies of RFID.

The passive mode of NFC is based on the principle of inductive coupling of radio waves. It is similar to the communication principle of RFID.

RFID and NFC are based on transmitting signals between two geographically close objects.

What is The Difference Between RFID and NFC?

RFID and NFC are very similar, but they are also different. RFID is a general term for the contactless exchange of data, and NFC is a subset of RFID. RFID is a method that enables contactless one-way communication over different distances. NFC usually requires user action. It allows two-way communication. They also have the following more apparent differences.

RFID allows long-distance use, while NFC only supports point-to-point short-distance service. The RFID tag has a reading range of up to 100 meters, and the reader does not need to see it to read it. It also supports reading a large number of tags at once. NFC requires two communication devices a few centimeters apart and a direct site line to the reader. NFC can only read one label at a time.

RFID only supports radio waves for one-way communication. Generally, the reader receives the radio waves from the tag to read the data. More common is the Passive RFID Tag (Passive RFID System). Through the electromagnetic induction generated by both, the passive RFID tag gets energy from it and activates the microchip inside. The microchip is activated and sends radio waves to the reader, which receives and reads the data information and uploads it to the system. After the electromagnetic induction between the two, the Active RFID Tag (Active RFID System) will actively send out radio waves to the reader.

NFC can communicate both one-way and two-way. It can be used as a reader or as a tag. It can support two more complex modes of interaction, including card emulation and peer-to-peer (P2P) data sharing.

RFID supports operation at several different frequencies. Here we mainly explain low frequency (LF), high frequency (HF), and ultra-high frequency (UHF). The LF RFID frequency band is generally between 30KHz – 300KHz. It only has a reading range of about 10cm. Although its read rate is slower than other technologies, they are well adapted to metal or liquid environments. It is usually used for some short-read-range applications.

The HF RFID frequency band is between 3MHz – 30MHz. It can read data at distances between 10cm and 1m. For the most part, it works well for payments, ticketing, and data transfer.

The UHF RFID frequency band is between 300MHz – 3GHz. It can achieve a reading distance of up to 12m. In some special cases, it can even be extended to 100m. Its data transfer rate is relatively faster. Because the cost of producing UHF tags is not high, they are mostly used in retail and other industries with high demand.

NFC operates at only one frequency – 13.56MHz. Due to the unique signal attenuation technology in NFC, it has a transmission range of only a few centimeters.

The distance has a considerable impact on the security of the data. RFID can be used in many different frequency bands. It has a reasonably long reading range of up to 100m. It means that hackers can easily steal its data information, and the data transmission distance of NFC is only a few centimeters. It may seem to be its disadvantage but also its advantage. It can provide a higher level of security for credit cards. The theft of data information from NFC cards is more complex than RFID credit card sex. Currently, several large payment platforms use NFC technology. They include Apple Pay, Google Pay, and Samsung Pay.

RFID communication systems include tags, antennas, and readers. All three of them are indispensable. Usually, the information is read and processed by the reader unidirectionally on the label. It is generally used for long-distance communication data transmission.

NFC combines the reader, contactless card, and peer-to-peer function into one chip. There are three modes of NFC. They are card mode, peer-to-peer mode (P2P), and reader mode. NFC is equivalent to a contactless card or tag in card mode. It can be used for mobile payments, access control, tickets, etc. It becomes the only electronic identity credential for the user. When it is in P2P mode, NFC is used for data exchange. It is used only as a contactless reader in reader mode. NFC is a private communication method nearby.

RFID VS NFC: Where are They Usually Used？

RFID is commonly used for tracking. It is used for applications that require reading over relatively long distances. These applications are manifested in

RFID applications in the healthcare industry. It uses in a dual interface system for patient monitoring. Usually, patient monitoring devices measure patients’ vital sign parameters. Data such as blood pressure and heart rate. General tags cannot manage these necessary data effectively. These data have exceeded the scope of simple inventory control. These problems can be easily solved by using dynamic RFID tags. It is embodied in the ability to record measurement parameters and input new data into the system.

RFID can create a better community security system. Install readers in the entrances and exits of the community and in the passages where various people may pass. At the same time, RFID electronic tag ID cards are placed on each vehicle that needs to enter the community. The communication line will exchange data with the ground monitoring center. They allow for a more secure security system. The card reader will scan the vehicle when it enters the district. At the same time, the monitoring center will receive relevant information immediately. The monitoring center can know the specific data of the vehicle. This data includes vehicle owner, driving location and time, etc.
RFID provides a better way of cell management.

NFC is commonly used for communication. It is only suitable for point-to-point proximity applications. These applications are manifested in

NFC is an ideal enterprise application. Most smartphones now come with NFC capability. It can use in a variety of ways. For example, employees can freely carry NFC devices to and from employee parking lots. Employees can use the employee cafeteria and pay for their meals directly. Attendees can wave their compatible phone now in front of the NFC tag to turn it into silent mode before attending a meeting.

NFC has a profound impact on marketing. For example, there are now many posters, ads, and billboards with NFC chips. Users can swipe their NFC-enabled smartphones over them to get product information. Some businesses place NFC tags on promotional locations at the door. Users can access product information using their compatible phones. They can synchronize their logins to social platforms. Users can share with their friends.

RFID VS NFC: Which is Better？

In summary, we can see that both RFID and NFC have advantages and value. While RFID can read multiple tags long distances, RFID readers are expensive. NFC is embedded directly inside the smartphone, which does not require costly hardware. RFID does not require a straight line of sight to read tags, but NFC can often store more complex data. NFC is also relatively secure because it requires point-to-point proximity to transmit data.

RFID is more suitable for users who have a large number of physical assets. It’s better at long-range recognition. NFC is ideal for users who are extremely sensitive to data security and need to enrich tag data. It is more aimed at communicating with consumer electronic devices. RFID VS NFC, I think we need to look at different business needs to know which is the best.

RFID is a more mature technology compared to NFC. But NFC has a vast world of development. I wonder who will be better in the future, RFID VS NFC?

What are Semi Passive RFID Tags and What are Its Advantages?

Why Use RFID Clothing Tags in the Apparel Industry?