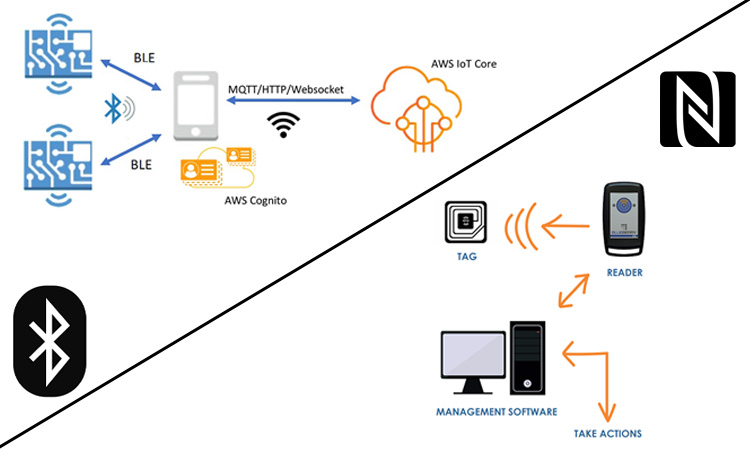 Bluetooth is a technology that comes with many smart devices. Most people probably know very little about the other technologies. So do you know what the difference is between Bluetooth vs NFC vs RFID?

In 1998, Bluetooth version 1.0 was officially launched to the public, and its maximum transmission speed was only 723.1Kbit/s. Its farthest transmission distance was 10 meters. The early version of Bluetooth 1.0 had many problems but has become a more widespread technical standard. It is suitable for most smart electronic devices. People can initially have these smart devices paired with mobile phones and headphones. It was later developed to pair heart monitors with other medical devices. It allows for simultaneous data processing as well as voice transmission. It allows users to share voice, music, photos, and other information between paired devices.

As the technology continues to evolve, the Bluetooth standard has grown steadily. Bluetooth technology has been in development for over 23 years. It has been upgraded from the original version 1.0 to the latest version, Bluetooth 5.3, which will be released in July 2021. each new release means that features, modes, power options, and communication topologies may have been added or updated.

NFC is short for Near Field Communication, a subset of RFID. It is a technology that evolved from integrating RFID and interconnection technology. It enables identification with compatible devices over short distances. The NFC chip can achieve more functions when it is built into the smartphone. The smartphone is capable of making small payments. It is also able to read information from other NFC devices or tags.

RFID is a non-contact automatic identification technology. It does not require the identification system to have mechanical or optical techniques to identify the target being read. It can identify a specific target through radio signals. It enables identification and data exchange with compatible devices over short distances. People can use it in a variety of unforgiving and harsh environments. It is used today in many ID cards, tickets, and electronic toll booths.

Bluetooth vs NFC vs RFID: Bluetooth and NFC

The biggest difference between Bluetooth and NFC is the maximum range they can each cover. However, they both use short-range wireless communication technology. They differ in transmission and reception capabilities.

The transmission range of NFC is about 4 cm, while Bluetooth is up to 10 meters. There is a huge difference between them. Using Bluetooth as a data transmission device allows you to make transactions at relatively long distances. On the other hand, NFC will only work properly at very close distances. In terms of transmission range, it is clear that Bluetooth vs NFC is the winner.

NFC uses a close-range and low-power communication technology. Its data transfer capability is relatively weak and has a low transmission speed. NFC’s transmission speed is much lower than other wireless technologies, at 400Kbit/s. But since it is mostly used for specific applications, such as contactless payments. It is fast enough to cope today.

Bluetooth can transmit data over a much larger range, meaning it needs more power than NFC. It has a high data transfer speed of over 2 Mbit/s. It is ideal for those who need to handle some relatively large data. People use Bluetooth for data transfer, such as music, images, videos, etc.

NFC connectivity is easy to use without any authentication. By manually turning on the NFC function and approaching other NFC-enabled devices. The data transfer happens instantly.

Bluetooth, however, requires a specific sequential procedure to transfer data with other devices. Usually, the Bluetooth connection requires entering a PIN code and some other configuration settings. It takes more time for the user to pair.

We mentioned earlier that the transmission distance of NFC is very short, which means that it has a higher level of security. It doesn’t have any security measures, including authentication or other verifications. But it requires two devices to be close to communicating, making it difficult for hackers to intercept data in transit. Unless the hacker is right in front of you to intercept it, he shouldn’t be that stupid. It is ideal for most payments and other sensitive/private data transactions.

Bluetooth transmissions are subject to PIN authentication and other security features. But Bluetooth transmission still has major security issues. It is also vulnerable to hacking. The reason is that its transmission range is too large, which allows hackers to find opportunities to exploit it. Hackers can intercept the data you are transmitting from a very long distance.

The comparison of Bluetooth vs NFC shows that Bluetooth has a clear advantage in our daily applications. But in terms of security, NFC is slightly better. Many other commercial giants are using NFC for contactless payments today. They include Huawei Pay, Apple Pay, Samsung Pay, etc.

Is Bluetooth a Type of RFID?

Our common ones are classic Bluetooth and low-energy Bluetooth. Their technical standards all use RF signals for communication and information exchange. So both can be said to belong to the Radio Frequency Identification (RFID) category. They usually contain a battery and communicate via the 2.4GHz frequency. We can categorize Bluetooth technology as active RFID technology. For uniquely identified devices, objects or assets, they both apply.

Bluetooth vs NFC vs RFID: Bluetooth and RFID

Accurately locating physical assets is a feature needed in any asset tracking solution. If a business adopts RFID as a tracking technology, additional hardware needs to be added. Businesses can utilize beacon readers to find the location of specific RFID tags. Unlike RFID, Bluetooth tags are location-based solutions. Depending on the strength of the signal, the Bluetooth tag will first transmit the signal to a neighboring relay. The exact location relative to the relay fixed at the specific location is then found.

RFID is mainly used to transmit a limited amount of information (including product, location, etc.) stored in an RFID tag to an RFID reader. Bluetooth has more functions than RFID functions. It can handle data and voice transmission so people can use it for many applications.

Although Bluetooth belongs to RFID, it still has obvious differences in usage. A complete RFID system requires several different devices to work together to make it up. In most cases, the information it stores is related to the product. This information can be the item’s location, the place of production, and the quantity. It is relatively more suitable for physical asset management. And Bluetooth is quite advantageous in carrying out data processing and voice transmission. Most smartphones nowadays will be equipped with Bluetooth capabilities. Most people will know what Bluetooth is and not much about RFID.

Bluetooth vs NFC vs RFID

Bluetooth vs NFC vs RFID: The Three in Comparison

Bluetooth vs NFC vs RFID is relatively different from each other. But they all have their advantages. If you ask who is more powerful among the three? It’s hard to say who is more powerful than the other because they work in different areas. I think they have improved our standard of living. They allow us to live a better life. So they are both the best helpers in our lives.

What is RFID Card and RFID Credit Card？

2022 The Latest Benefits of RFID in Healthcare